How to Fall In Love with the word RIGOR 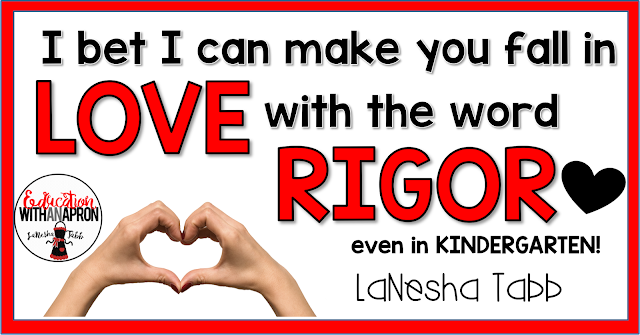 I felt really frustrated with word study so far this year. My class is made up of two types of kids right now: ones that know ALL their letters and sounds and ones that literally know like, three.  Everyone around me is teaching via centers/stations but friends, if you’ve followed me at all then you know that centers are NOT MY JAM. I was jaded my second year teaching when I worked at a school that had a solid 5 center a week rotation. I printed, copied them on 5 different colors of paper, laminated, cut, baggied, and labeled them all so I could spend my time screaming at poor children who failed return all of the pieces that had been printcopylaminatecutbaggied and left them on the floor.  HOW DARE YOU LEAVE THE GREEN WORD CARD ON THE FLOOR! IT GOES IN THE GREEN BAGGIE! IT’S LABELED! Poor kids. And to make the situation even better, the next year I was moved to another school and guess what- they didn’t do centers. All. That. Work. All that to say, I don’t do centers anymore. Like, at all. I even tried it once this year. I thought, let’s just make one week’s worth and see how it goes. Nope, still jaded. WHAT WAS I GOING TO DO THEN? It was the worst part of my day.

We’ve been studying the work of Dr. Marzano. All things learning scales, learning goal targets, success criteria, monitoring for learning…all that stuff. Heavy stuff, but GOOD stuff. You should know my misconception about the word RIGOR. My Marzano trainers kept using that blasted “r” word and I would roll my eyes and try to listen.  I think I’ve always hated that word because everyone started saying it at the same time and that safely puts it into the “buzz word” category. Also, from my ignorant understanding, to me it meant more, harder, and the least true: NEXT. I thought, “ok if they’ve mastered the skill, I need to be rigorous and teach them the next thing faster.” My lightbulb moment came when I was in the middle of my tango with making centers and studying Marzano. I kept hearing that rigor lives in the space where kids are working at increasing levels of independence at higher cognitive levels. 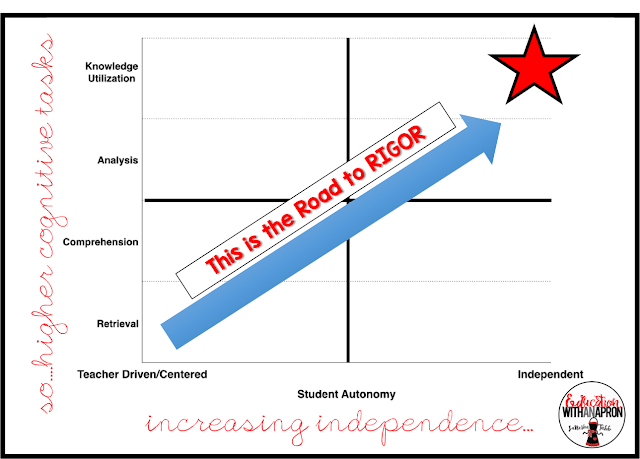 That’s when what they were trying to tell me FINALLY hit me: I don’t always need to move kids on to the NEXT thing…I need to take them deeper. I mean, I’d heard that over and over but for some reason, something clicked this time!

Then the wheels started turning. What would that look like in word study? With 5 year olds? My kids either know their letters or they don’t. Shouldn’t I move the kids that know their letters and sounds on to CVC words? Everyone else is…

So I decided to do two things. I knew I needed to get my 8 friends with little to no alphabet knowledge up and running in an ABC challenge club. (I may blog on that later. For now, I want to focus on how rigor saved my word study block for the kids that already knew their letters and sounds.) I decided to keep the SAME skill for the entire class- but put them on different cognitive levels. So my whole class is STILL doing letters and sounds. But if you’ve mastered the skill, then there is no reason why you can’t do some work in the knowledge utilization area. That’s the HIGHEST level of thinking we can ask our students to do and I’ve got 5 year olds killing it.

You’re like, ok seriously, just tell me how! Ok so I was scanning the list of possible products that students might do to show knowledge utilization and one of them said CREATING GAMES. That was literally all it took. I was so fed up and frustrated with word study that the very next day I had a meeting with my friends that knew their letters and sounds (the other kiddos were off doing some ABC work). I had no real plans (yet) but I told them that today they would be making games. I gave them a purpose because I told them that we weren’t successful until ALL students in our class could master letters and sounds and that I needed their help. I told them that they could help by making a fun game that would help our ABC club learn their letters and sounds. I literally said, “you guys are smart, creative, and helpful. Go make a game.” Would you believe that this was the most engaged, exciting work that I had seen all year? It was incredible. They set to work immediately. Because I didn’t really know where this was headed, the first day all I offered was a blank game board that I printed off, index cards, and dice. That was it. I was so amazed that I walked around and listened in. Here are the things I noticed:
*Cooperation. My “behavior” problems weren’t a problem. They were invested immediately.
*Critical thinking. I heard 5 year old saying things like, ” Well, for that to work we would BOTH have to make the alphabet on our index cards.”
*Purposeful planning. I heard little children making plans like, “I’ll lay out the capitals and you lay out the lowercase and we can make sure they all match.”
*And most importantly, the QUESTIONS! I was able to ask things like:

And so many more! I mean, WOW. All of that thinking work. I see what they mean by rigorous! The thinking deeper, not harder. Deeper not more- and deeper, not NEXT. Of course we will move on to “next” but for now, we are camping out as a class right here at letters and sounds. I have other ideas for rigorous work as we progress throughout the year! I’m thinking, plays, commercials, books, jingles- all things that they can take their knowledge and utilize it.

Like I said, the first day, I threw some index cards and dice at them. I ran home and designed some more items that I could put out to help my game makers. They were floored when they walked into this… 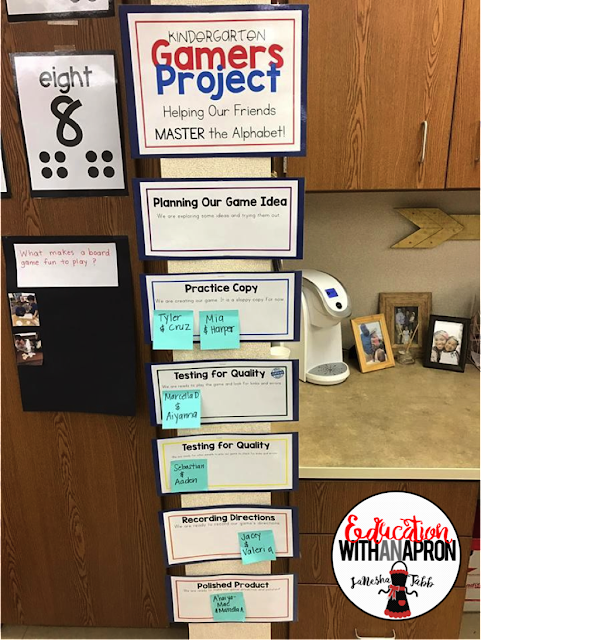 And accountability tools to help with the phases… 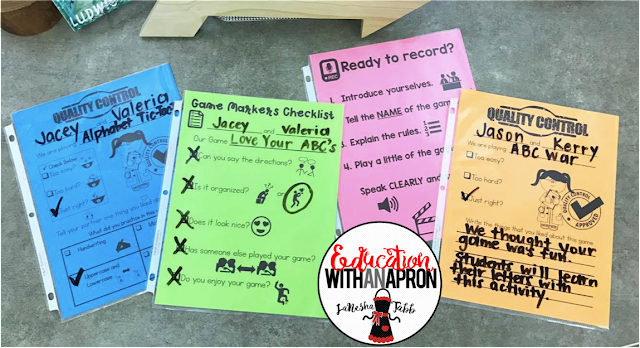 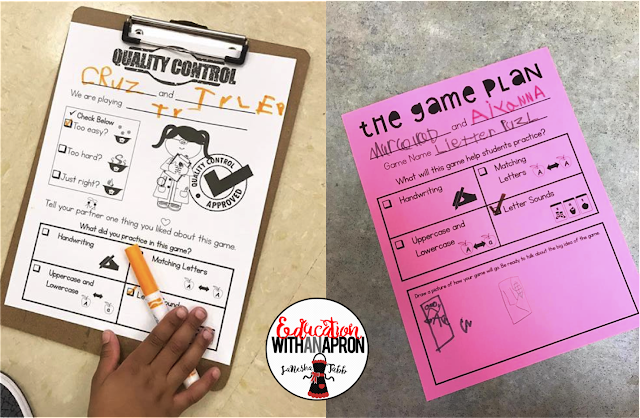 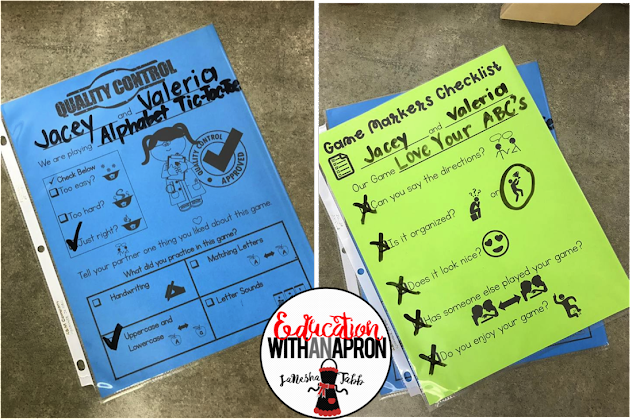 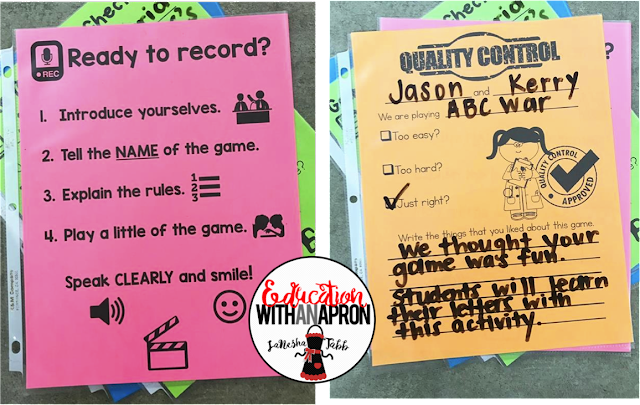 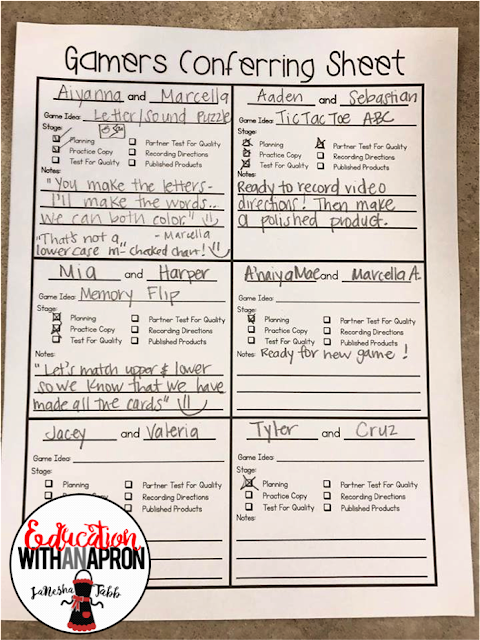 And here are some snapshots of these games created by the brilliant minds of littles. 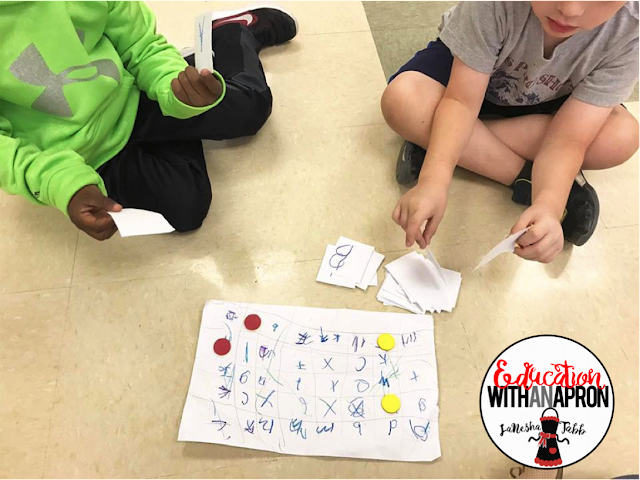 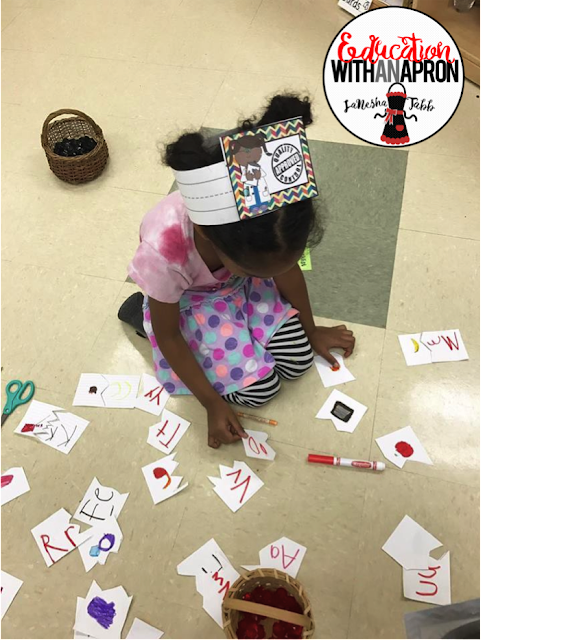 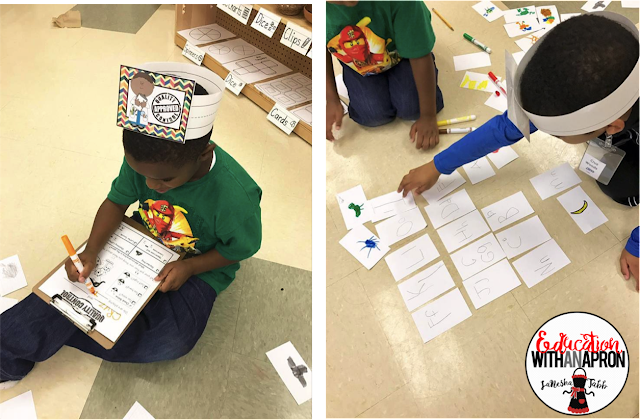 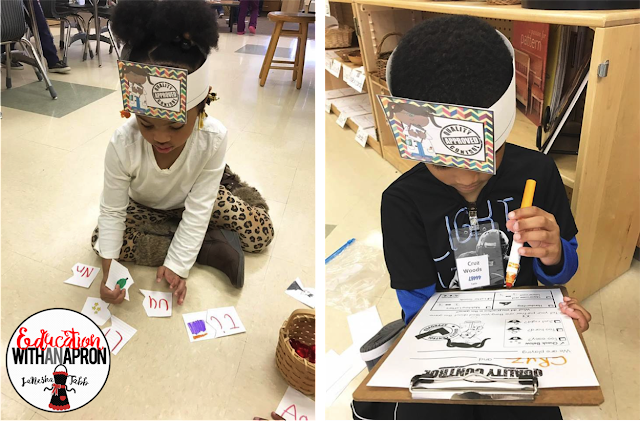 When they record their directions, there will be a card inserted in each game. We will offer the games to all of the primary classes in our building so other students can play. They are DARLING. 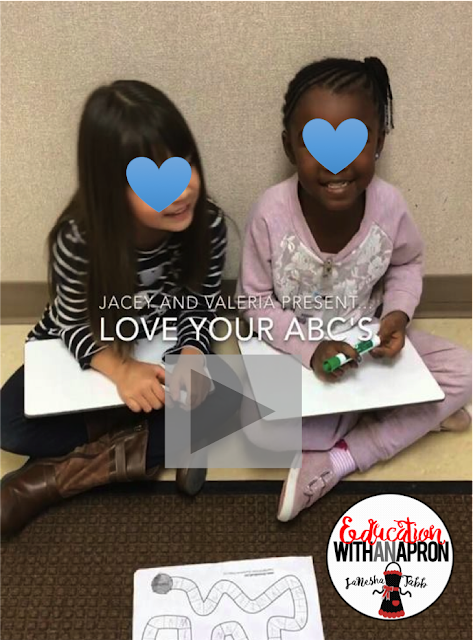 My students feel empowered and they know that their work matters. They are thinking deeply, being creative, and working hard. It’s not hardER, it’s rigor. And we love it.

Here are a few more photos. You’ll see some sample games that my students created.

Two of my students created a game that asks students to practice handwriting. You roll a die and move your pawn that many spaces. Whatever letter you land on the the letter you have to write that many times on a white board. So if you roll a three, move three spaces and land on a “B” then you write B three times. AMAZING! 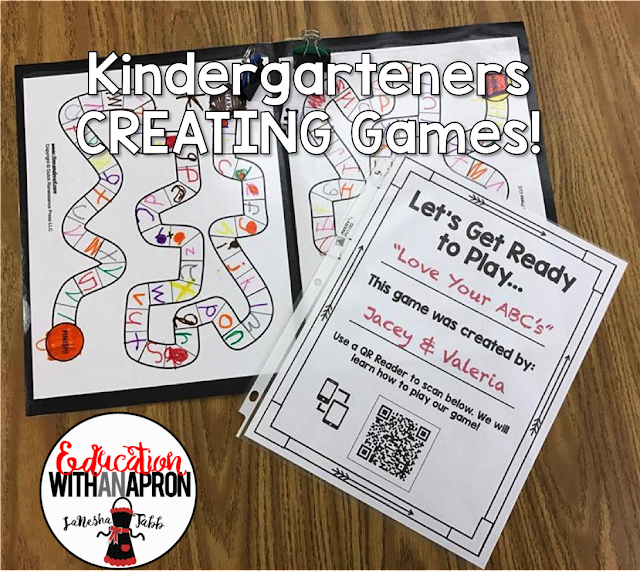 This is a simple letter/sound match. The thinking work that went into this game was so much fun to watch! 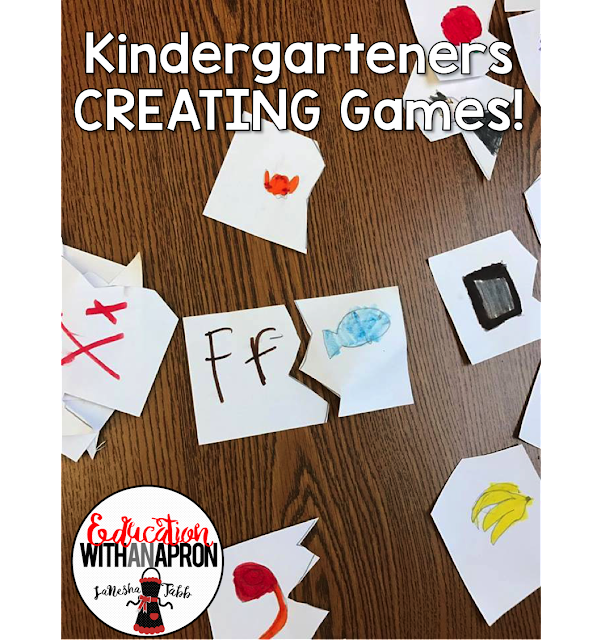 This game practices upper and lowercase recognition. You draw a card from the deck that contains an uppercase letter. You find the letter on the board and mark it with a chip. Then your partner does the same thing. The first player to get three in a row wins! Can you even deal? I couldn’t!! 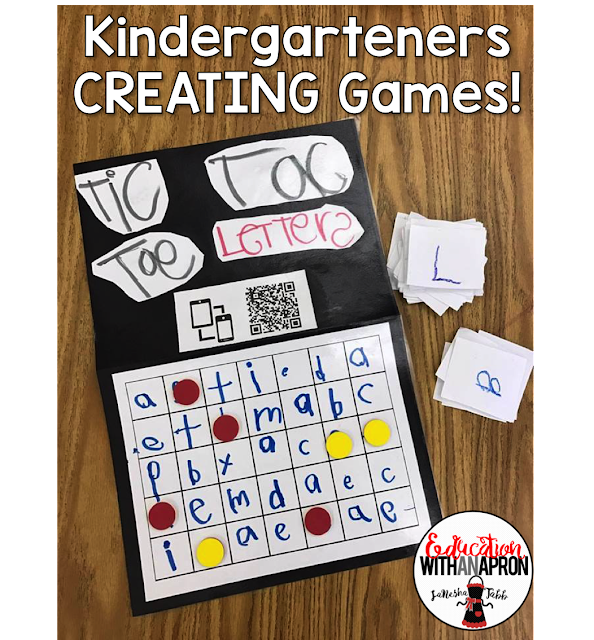 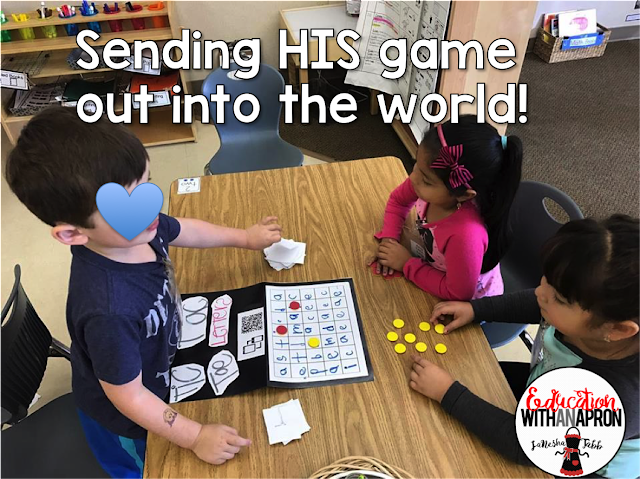 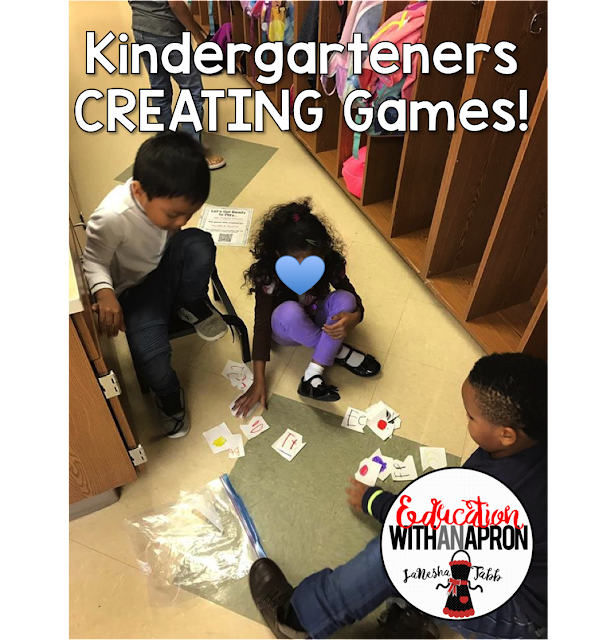 I surprised them by laminating the games. They were in shock! 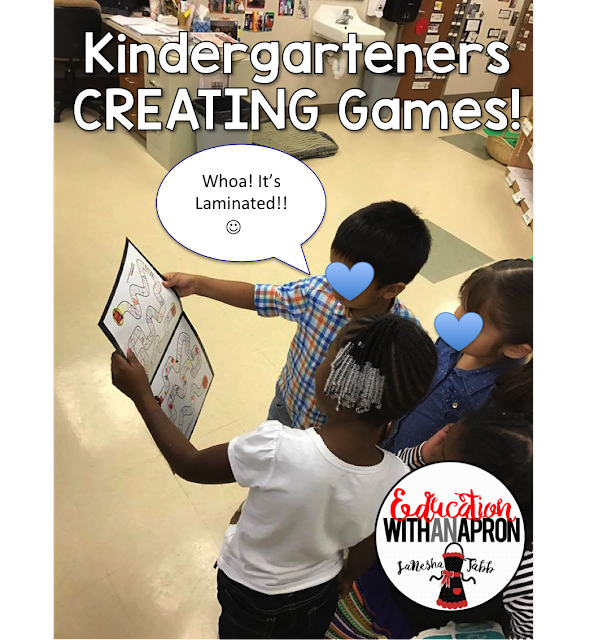 We released the game in our class before sending them out to the other KG classes. Our ABC club needed the practice and they loved playing their classmates’ games! 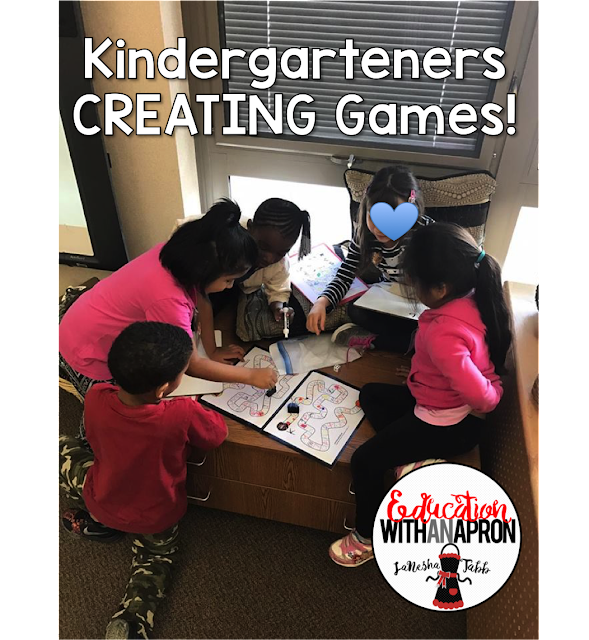 Our plan is to send the games to other classrooms next week. I wanted the game makers to be able to get feedback on their game, so I created a survey sheet that can be tucked in the game bag. 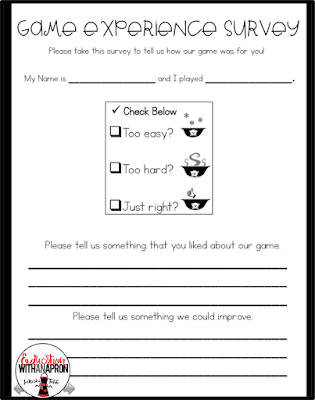 I’ve been talking for SO long. I hope I was able to share how I am able to ramp up the cognitive complexity for primary skills and have FUN! These game makers are engaged, informed, decision-making learners that have thrived in the name of RIGOR!! They are smart. They are creative. They are capable. Let them do their thang!
If you’d like to try this out, I’ve complied all of my game-making printables into one file! You can clip the image below to find it in my Teachers Pay Teachers Store! 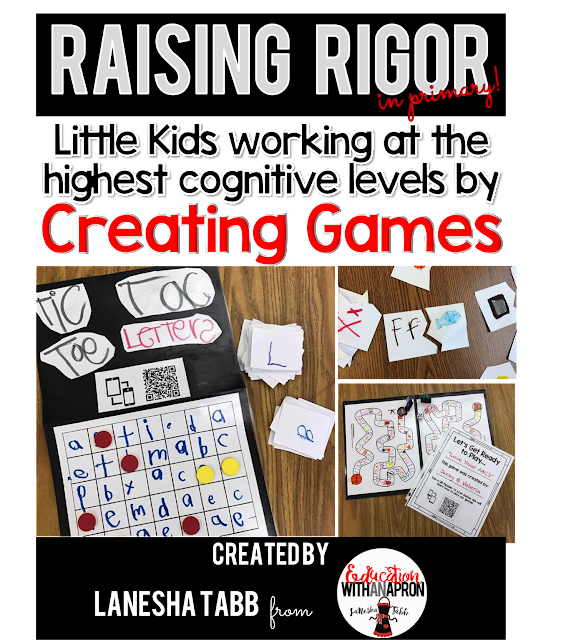 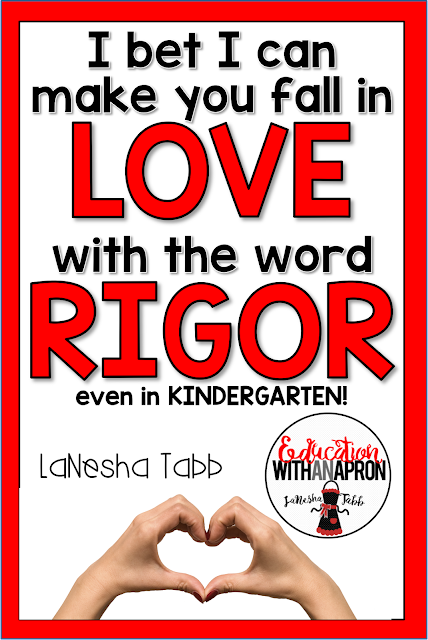 PrevPreviousWe’ve Got To Stop…
NextHearts at Ease, Minds at Peace: A Mental Health Check-In for SchoolNext

Wife, Mama of 2, and apron wearing primary educator from Indianapolis.